A little Sunday night free poetry; the image Chet Baker's 'Almost Blue' conjured up in my mind was too vivid to resist putting pen to paper.

To be read whilst listening to the song.

Your monochrome form, whose soft touch
Draws forth an elusive sound.
Caressing the keys, the wombing of notes that ebb and flow,
In waves of sound; endless undulations.

You, who tease out a timbre that throbs, pulsates, elevates
A balmy blues that slides, vibrates, resonates -
Such inescapable elation!


Illustrative of my wishful escapism to smoky jazz club...

Made in Morocco: Chefchaouen

The Gateway to Africa, Morocco's vibrant exoticism has long been seducing travellers but now it's firmly on globetrotting radars as an of-the-moment destination. From the hedonism of Marrakech to the ever-changing vistas of the Atlas Mountains and the vast Sahara, it's a land of changing terrains, languages, cultures and design. A visual treasure box bursting with jewel tones, intricate wood carvings, soaring minarets and colourful ceramics, it's been on my hit list ever since I read about Essouira in an edition of Condénast Traveller from two years ago. Finally, this year, after 24 months of dreaming about desert mirages, bustling medinas and wild Atlantic coasts, I made it to Morocco! A two week trip traversing the country from North to South, a total of 1010.6km, opened my eyes to this culturally rich (this is a serious understatement!), fast-paced and heartwarmingly friendly country of wonders. 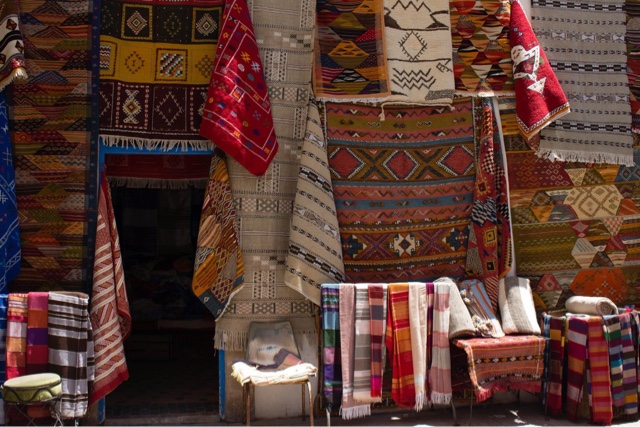 Photos by Maeve Brayne; musician, photographer and all-round creative genius from the Lake District but currently living in Lyon. Check out more of her creations here: https://www.facebook.com/maebhmusic/ and https://www.flickr.com/photos/maevebrayne/

Disappointingly however, despite foraging in the depths of every carpet shop we came across (and there are thousands) we did not succeed in finding one that flies. Magic carpet aside, thankfully I was able to compensate for this at a tailors in Essouira, where I struck gold with a  rather Jasmine-esque ensemble! 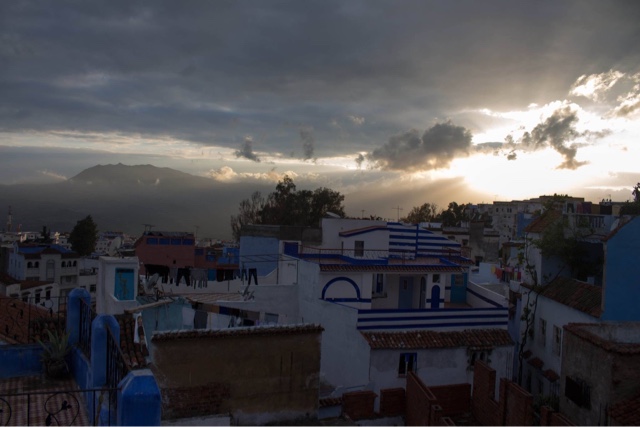 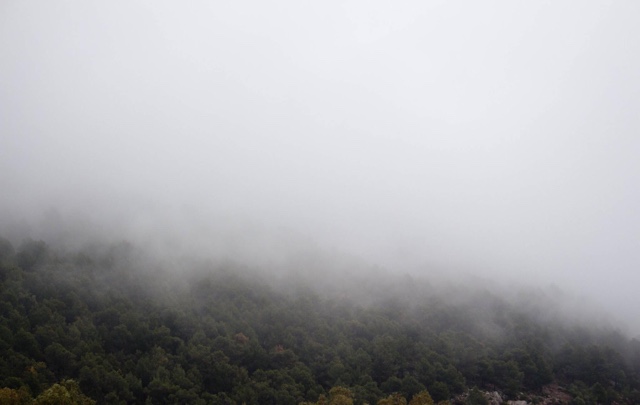 What is incredible is how much Morocco changes, almost brutally, as you move from North to South. Up North in the Rif mountains, the Atlas' moodier younger sister, daily rhythms are set by temperamental weather patterns. Forget about all that hot, sun-burnished image that the word 'Morocco' conjures up. Here it's much more Sierra Nevada than Sahara. At the mercy of the elements, the Rif's rocky embrace means heavy clouds descending over the peaks, swollen raindrops (there's no April 'showers here) that drench the streets in unforeseen bursts and the surrounding landscapes are much harsher than I ha previously imagined. But it's exactly this that gives the North its charm, as well as an air of mystique. 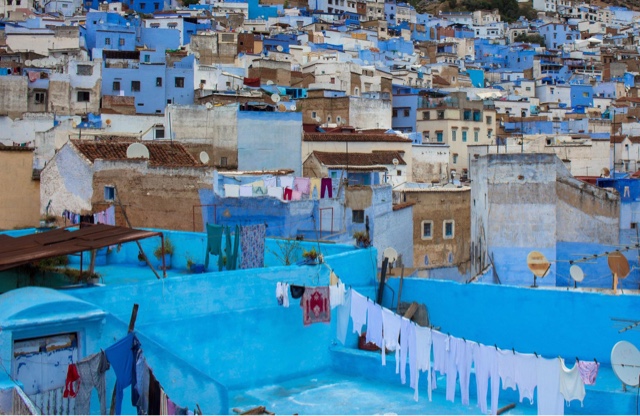 Our first destination was Chefchaouen, the little town famed for its perpetually painted walls. Arriving by creaking, local bus from Tangier, we painstakingly climbed the steep lanes leading up to Chefchaouen, perched at the summit and ringed by the Rif.

Atmospheric and hushed, the winding blue labyrinth of Chefchaouen's streets are filled with vaporous clouds rolling down from the surrounding mountains and highly-decorated yet hobbit sized doorways sit underneath metres of azure blue stone. 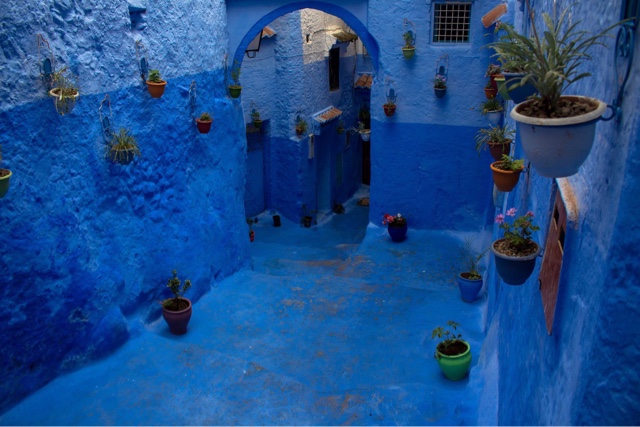 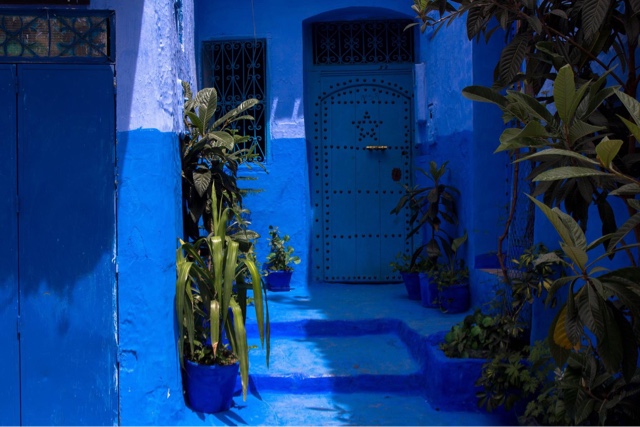 A local crouched outside his family's tapestry shop stared out at us from the black and white hood of a thick woollen djellaba. Then, this dark, wind-burnished face cracked into a toothy wide-open smile. This unexpected burst of warmth was something we encountered every few steps in Chefchaouen. Although it took a couple of times for us to realise that the peppering of questions 'Where are you from? First time in Morocco?' and the ubiquitous 'Be Welcome' (the rolling sound of Merhaba in Arabic) was harmless; friendly chatter that inevitably led to a invitation to take mint tea at the man's family home (which by chance, was also an artist's studio, restaurant and live-music venue.) And afterwards, check out his family's tapestry shop, of course. But this flow of friendliness and the occasional dirham or two seems to be the Moroccan way of doing business. And verbal economics is definitely a style I prefer as opposed to entering card details into a soulless webpage and waiting for home delivery. 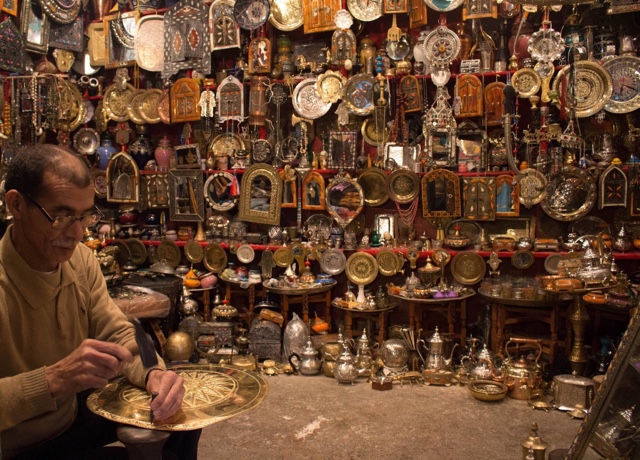 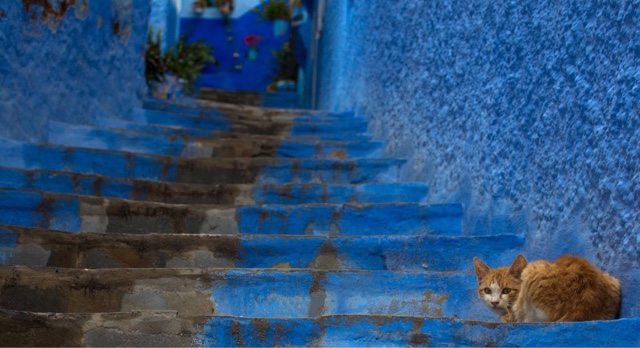 Calm and quiet because of the rain, surprisingly Chefchaouen's otherwordly streets didn't get busy until about 10.30am. More than enough time to wander into the nearest pancake shop, looking for that incredible Moroccan breakfast. And we didn't have to look very far! Pancakes, crepes (yes, both!), unlimited supplies of bread (they are even contesting the French here), eggs, honey and every flavour of jam impossible all turned up on our colourful breakfast table. Curled up with food and conversation for days, we watched several of the town's 1001 kittens frolicking and pouncing around in the morning drizzle. 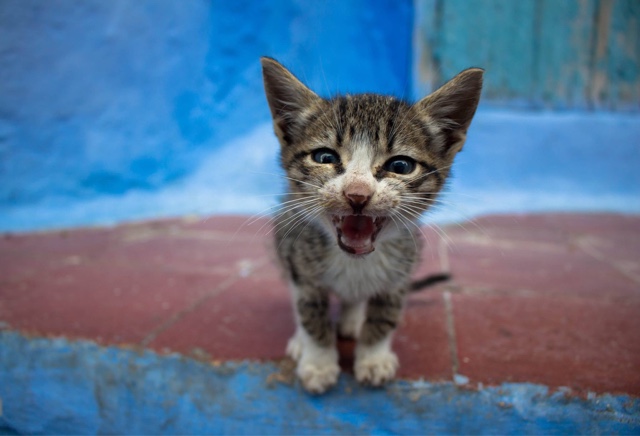 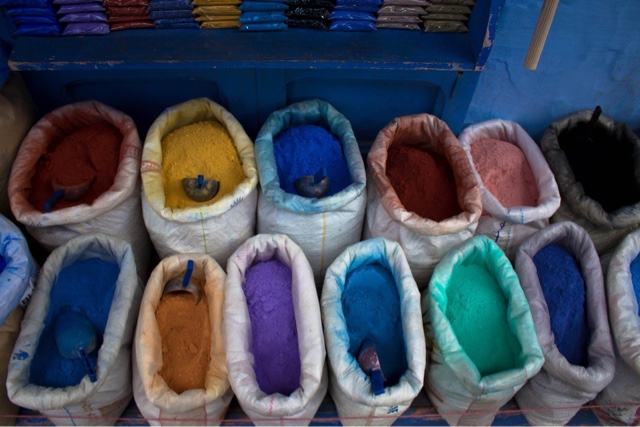 On the corner of every street, alongside carpets, bags, mirrors and jewellery 'Berber' there's jam-packed sacks of pastel tinted powder - the very powder that is mixed with water to create every shade of blue imaginable and then  painted all over town. From lavender and bluebell tones to the vivid cobalt and electric blue downtown in the market square, Chefchaouen's quirky sprawl of buildings is any artist's delight.

Our Riad in Chefchaouen was one of the most silent and tranquil environments I have ever stayed in. Tall and narrow, steep wooden steps connected the beautifully decorated inner patio, six guestrooms and terrace. We were consistently and pleasantly surprised by Riad Antonio. Downstairs, the cavernous bathroom (with hot water!) had been carved by Antonio out of the natural rock, and painted Andalusian wood, colourful fabrics and ceramic fountains adorned the walls. An ingenious and eco-friendly draining system of recycled plastic water bottles siphoned the rainwater of the tarpaulin roof and into the fountain. The eponymously named Antonio was himself a calm and low-key man, a lovely host and more than happy to teach us the secret art of Moroccan tea! 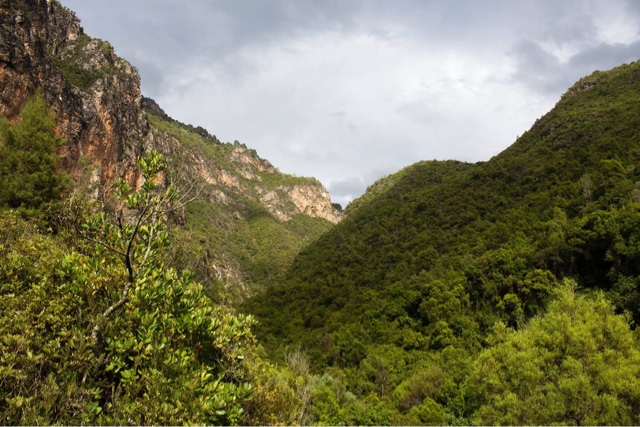 Expanding our horizons a little, a trip into the surrounding countryside took us to Akchour Waterfalls. Arriving by bright blue 'Grand Taxi' hurtling along the mountain roads, the dusty ochre coloured earth soon gave way to a well-trodden tourist trail. Dotted at intervals along the path's ascent were pit stops and snack bars, each with giant tagines bubbling on naked fires and smoke billowing out from the hot coals. Tubs of flavoursome oranges sat ready to be pressed into juice for the throngs of thirsty hikers en-route to the source. More into the 'slow' ethos than the 'hike' one, the expected one hour stroll to the waterfall, with a leisurely lunch sat next to one of the bottle-green streams soon turned into a three hour trek just to reach the Grande Cascade! Having scrambled over little streams, up steep slopes of loose gravel and over fallen tree trunks, the sight at the end was well worth the climb! The water plunged off the cliffside, an overhanging mossy rock acting as a colossal sluice for the gallons of water falling into the pool below. Due to our late arrival at dusk (what a surprise) we were the only ones at this sight of such natural beauty. A sudden need for liquid energy kicked in. Luckily this is more than understood by the heavily caffeinated Moroccans! Lo and Behold, a young man had set up shop just 100m from the main waterfall. He actually slept all year round up there, in his canvas tent and used donkeys as pack mules when he needed supplies. One frantic conversation conducted in a jumbled assortment of French, Spanish and English resulted in two much needed cafés au lait, serving as a kind of apératif, dinner and energy boost to get us down the mountain again...this time in the moonlight! 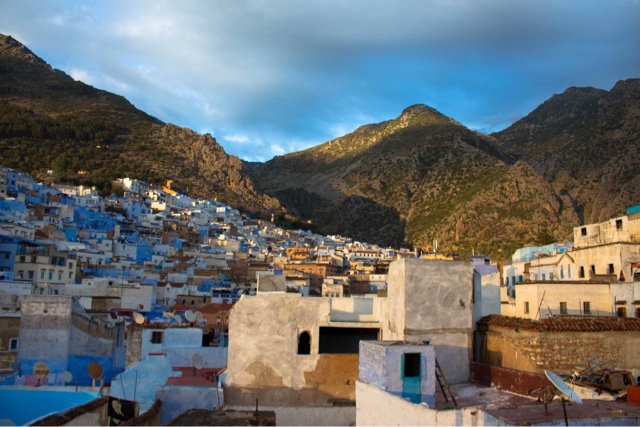 Much more than just a haven for hasish smokers, Chefchaouen's mystical shadowy blue streets were an enchanting and inspiring first stop on our Moroccan adventure. From there, the madness continued down in Fez...

Claire McQue
Wanderlust. Cultures. Coffee. Clothing. Travelling, chatting, eating and dancing my way around the world, documenting the beautiful, the wearable, the edible...and everything in between! Style Editor of The Gryphon, currently studying French & English Literature at the University of Leeds and living in Montpellier!